Express Comment - Ranil Jayawardena MP - Only a good, fair settlement will win back trust of our people 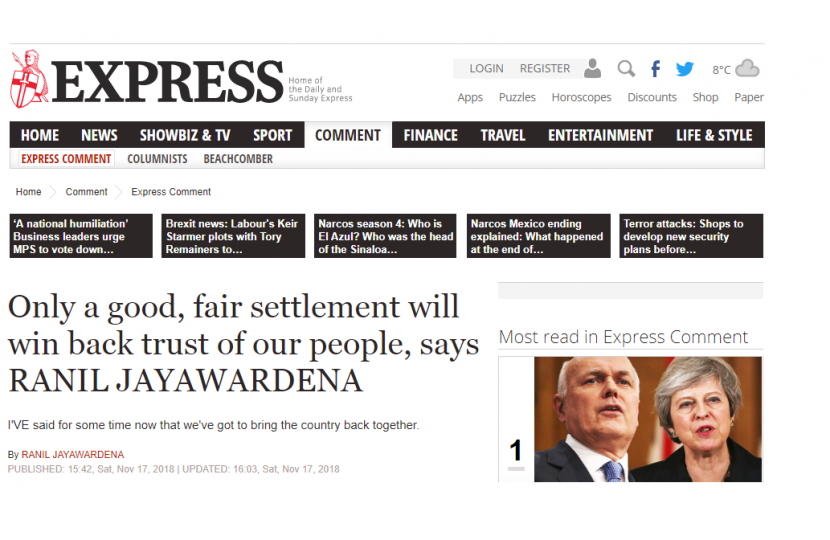 The following article by Ranil Jayawardena MP appeared in The Daily Express | Comment on 17th November 2018.

I'VE said for some time now that we've got to bring the country back together.

To do that, politicians need to win back the trust of the people - and a good and fair Brexit is critical. That is a Brexit that is good for those who have family or business links to Europe and that is fair to those who voted to leave - to take back control of our laws, our borders and our money. The trouble with the deal in front of us is that it continues to undermine trust in politics by claiming to do this, contrary to the underlying facts.

That's not right. The people are tired of politicians spinning a message.

The sooner politicians realise that we have to be straightforward and upfront - even when the news is challenging - the better.

The so-called "deal" does not take back control of our laws.

The European Court of Justice will continue to have a role and will, in some circumstances, be binding on British courts.

It does not take back control of our borders - we will continue to be in the Customs Union for an indefinite period - and we can't leave without the EU's say so.

It does not take back control of our money - we will have paid £39billion without any guarantee of securing a trade deal that works for Britain.

Call me old fashioned but I believe in standing by manifesto commitments.

We promised to leave the single market and the customs union.

We committed to pursuing new trade agreements with other countries, at the same time as maintaining free trade with European markets.

This draft agreement puts these and other commitments at risk too.

Surely we should lock down a trade deal with the EU that is free from red tape, boosting trade with the world, before we throw away our ace card by paying £39billion? Britain has an amazing opportunity to seize a new role in the world, as the beacon of free trade.

That's only possible if we leave the protectionist EU.

The trouble is that the "common rulebook" proposed by the Prime Minister is actually the "EU rulebook".

And that will mean scuppering Britain's ability to do the ambitious deals of the future.

We need to be more agile - in control of our own destiny, ready to adapt in a changing world - to make sure that our best days lie ahead.