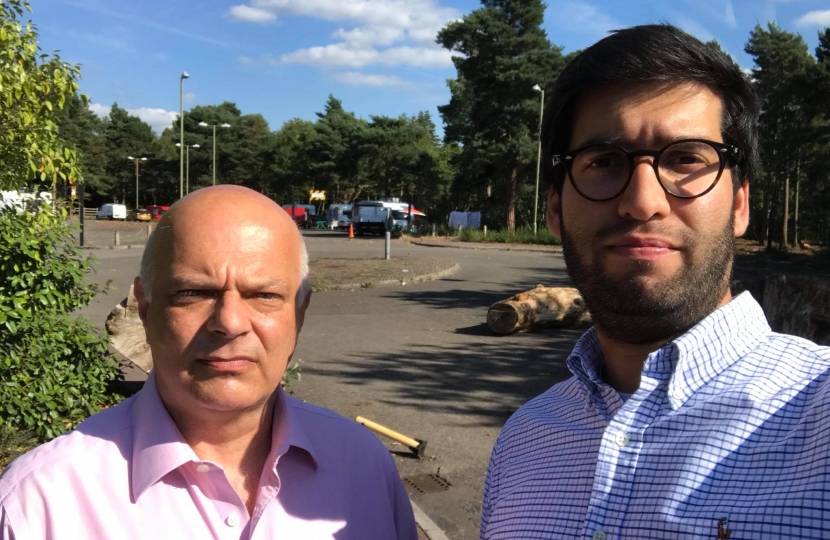 Laws to strengthen police powers against unauthorised traveller encampments are now being considered by HM Government following a petition launched by Member of Parliament for North East Hampshire Ranil Jayawardena.

The Home Office and the Ministry for Housing, Communities & Local Government today [Wednesday 6th February 2019] announced that they support many of the changes to the law suggested by Mr Jayawardena and supported by thousands of residents.

“This is excellent news for residents fed up of the nuisance of unauthorised encampments and the length of time it takes to move them.

“I’ve made it clear to Ministers that the current law is simply inadequate and they have proven that they are listening – they agree with us and they want to change the law.

“However this is just the next step on our journey. There will be forces against us that will now try to stop this change. We need the silent majority to speak up.

“I’ve made this easy to do so by launching a new petition which supports this package of measures and asks the government to get on with it. I encourage everyone tired of this flagrant lawbreaking to sign it and share it with their friends and family.

“We have made good progress, so let’s keep pressing HM Government until this change is delivered.”

The proposed legal changes would enable the police to direct trespassers to encampment sites in neighbouring local authority areas – they can currently only direct them within a local authority – and scrap the six-vehicle threshold before police powers can be used. They would also make ‘intentional trespass’ a criminal offence.

Mr Jayawardena’s original petition was presented to the House of Commons on Wednesday 13th June 2018. A month later, the High Court granted Basingstoke & Dean Borough Council an interim injunction allowing it to deal more quickly with unauthorised encampments within key areas of the borough.

This covered Basingstoke town as well as areas of Bramley and Silchester worst effected by encampments. The injunction granted the police and landowners the power to prevent individuals from setting up unauthorised sites, as well as the power to remove them immediately.

As a previous Deputy Leader of Basingstoke and Deane Borough Council – and now as a Member of Parliament – Mr Jayawardena has long campaigned to give local residents more rights to remove people from their own land in the face of unauthorised encampments.

He has previously raised this issue in debates in the House of Commons, saying:

“We do have discrimination in this country, not against Travellers and Gypsies, …  but against the hard-working, honest residents of communities up and down the land, the silent majority.

“It is a totally unlevel playing field and something must be done. Constituents demand it—and, boy, do they deserve it.”