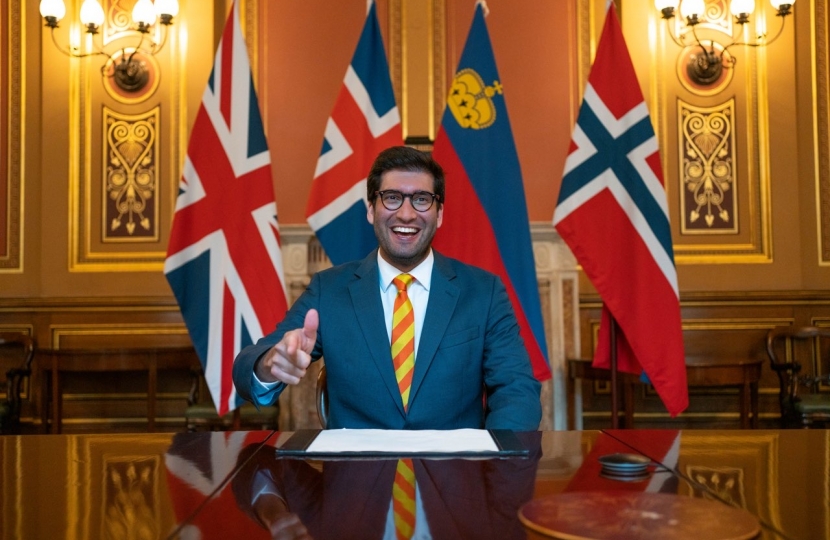 FREE and fair trade has built Britain up by helping create new jobs, businesses and industries. As a newly independent trading nation, we are using her full power at this critical time to fuel our recovery and build back better.

We are delivering on the promise of Brexit by doing more than ever with like-minded democracies to help British businesses go further. Today, I was proud to agree a ground-breaking deal with our friends in Norway, Iceland and Liechtenstein, setting the standard for modern trade. This is one of the first in Britain’s next generation of deals, which will take our trade with these partners – worth £21.6 billion last year – to ever-greater heights.

We know that around 6.5 million jobs up and down our country have relied on exports, so the best way to drive forward our exports-led and jobs-led recovery lies in embracing opportunities overseas.

Our new deal slashes foreign tariffs that were as high as 277 percent for exports on world-class British food and drink so it can be even better value. The benefits will be felt by businesses in every corner of our United Kingdom, from Yorkshire pig farmers to Scottish fish feed producers and Welsh cheesemakers.

In turn, we are cutting tariffs on imports of shrimps, prawn and whitefish, which is great news for British fish processors from Grimsby to Glasgow, backing 18,000 jobs.

And this deal cements Britain’s status as a global hub for services and digital trade. We have secured clearer rules for financial services, which will make sure that this trade, worth £570 million last year, can go to the next level.

We are showing our resolve to drive forward the industries of the future. This is the most advanced deal Norway, Iceland and Liechtenstein have done to date, as they agreed for the first time to dedicated chapters supporting digital trade and small businesses.

Together, we are cutting through ridiculous red tape, with British firms now able to export to Norway and Iceland electronically without the need for cumbersome paperwork. And, in a world first, our free trade agreement clears the way for caps on international mobile roaming charges, which will help keep costs low for holiday makers and business travellers.

Meanwhile, this deal will enable musicians and entertainers to perform in Norway, Iceland and Liechtenstein. Faster and simpler visa processes, alongside routes to recognition of professional qualifications, will support a range of professionals such as vets, nurses and lawyers.

This deal marks the next step in realising our vision for Global Britain: an independent trading nation taking the best of British businesses further and faster worldwide while putting more money in the back pockets of the British people.

It is great to be paving the way to prosperity alongside like-minded allies such as Norway, Iceland and Liechtenstein. Together, we are showing that the best way forward for us all lies in free and fair trade – and that trade means jobs.

This article was originally published in The Express on 5th June 2021.