LOCAL MP ENCOURAGES NEXT GENERATION OF DESIGNERS AND ENGINEERS 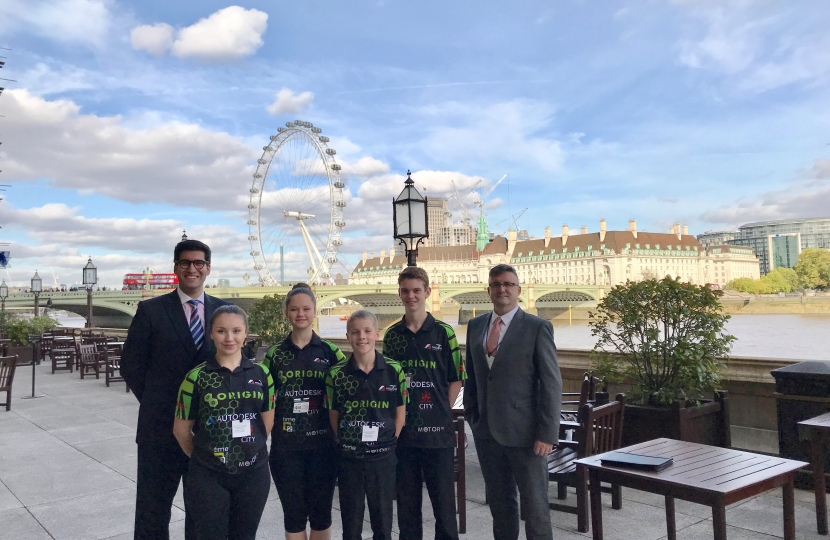 Ranil Jayawardena – Member of Parliament for North East Hampshire – recently met students from Robert May’s School, Odiham, in Westminster to encourage them in their interests in design, technology and engineering.

The students were in Westminster to attend an event hosted by the Design and Technology Association, in conjunction with the All-Party Group on Innovation and Design and the Edge Foundation, to discuss how best to train the next generation of designers and engineers.

As part of the event the Robert May’s students exhibited and demonstrated work developed in their design and technology and engineering lessons, including robotics, 3D printing and drones.

Attendance at the event capped a successful few weeks for the students, who recently returned from the World F1 in Schools Championships, held in Malaysia. Earlier in the year, the team were crowned National Champions – Development Class at the UK Championships before finishing as the highest placed British team and fifth overall at the World Finals in late September.

Following the Parliamentary event, the students took Ranil Jayawardena MP up on his invitation for a tour of the Houses of Parliament and a meeting with him to discuss their success and the wider topic of Design, Technology and Engineering in schools.

“It was a great pleasure to meet the students from Robert May’s School and to congratulate them in person on their wonderful successes at both the UK and World F1 in Schools Championships.”

“Design, Technology and Engineering are important subjects and will only become more so as technologies continue to develop in the future. I would encourage all schools to take them seriously and to promote their benefits to those students with the talents to take such subjects forward.”