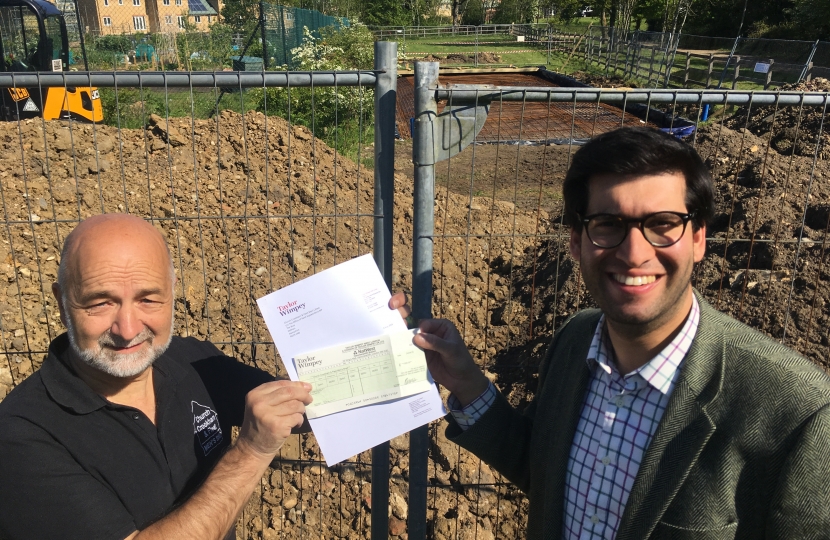 The MP met with Allan Wilson, Chairman of Church Crookham & Fleet Men’s Shed, at the charity’s future ‘shedquarters’ by Church Crookham Allotments to present the cheque for £1,000 on behalf of Taylor Wimpey.

“I know Church Crookham & Fleet Men’s Shed is going to be as transformational for the whole community, as it has been for its members. Allan has been a great champion for the project and has put in so much hard work to date, so it’s a great cause for Taylor Wimpey to support.”

Church Crookham & Fleet Men’s Shed was founded in January 2017 and has operated out of Calthorpe Park School while its members raised money to build a permanent workshop on the plot donated by Church Crookham Parish Council. The group hope to move into the building by the end of the summer holidays.

“We’re grateful to Ranil for supporting our successful National Lottery bid and for securing this additional support from Taylor Wimpey, which we’ll be using to buy equipment such as a cutter to make a big sign for Church Crookham.

“The local community has been brilliant. We’ve raised £20,000 locally so far and have a container full of things people have donated.

“It’s all about male wellbeing. We men aren’t all that good at talking but most of us like to dabble in something in some way, and the Men’s Shed gives us somewhere to go to share skills and resources, learn how to do new things, and get the opportunity to talk. With suicide the biggest cause of death for men under 45, that’s really important.”