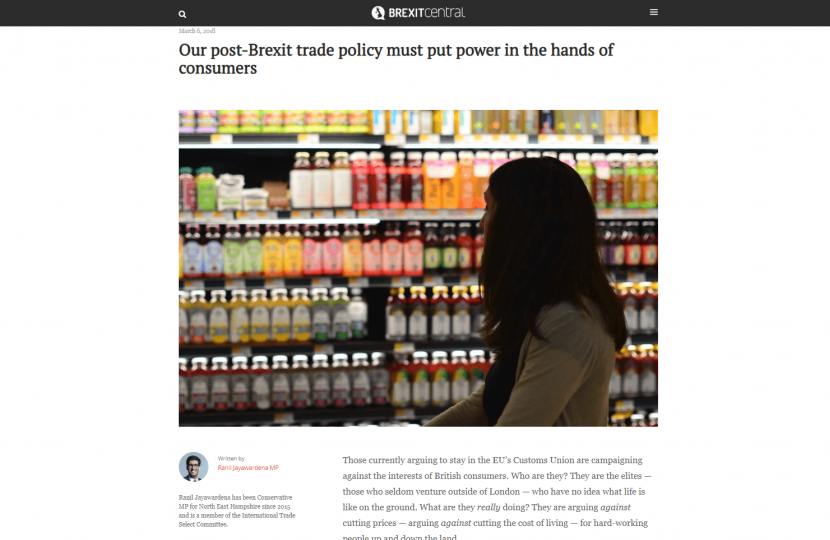 The following article by Ranil Jayawardena MP appeared in BrexitCentral on 6th March 2018.

Those currently arguing to stay in the EU’s Customs Union are campaigning against the interests of British consumers. Who are they? They are the elites — those who seldom venture outside of London — who have no idea what life is like on the ground. What are they really doing? They are arguing againstcutting prices — arguing against cutting the cost of living — for hard-working people up and down the land.

We’re at the start of a journey. We’re at the beginning of many blossoming new friendships. Leaving the European Union offers us an unprecedented opportunity to create a greater Britain for the next generation. But, without putting the British consumer at the heart of our efforts — whether in Parliament or in the negotiations — we will be no better off than if we had resigned ourselves to being an outpost of the Brussels bureaucracy forever.

For the first time in four decades — certainly for the first time in my whole lifetime — we will have the ability to seek our own trade deals with our friends around the world, creating a peaceful and prosperous future for our peoples. I’m in politics for the next generation; if we want our children to have better lives tomorrow than we have today, we must solidify our commitment to continued economic growth. The consumer is critical to our success; we must put the consumer at the heart of all we do.

As I wrote in a recent article for PoliticsHome: “Protectionism doesn’t work. It stalls innovation, stifles enterprise and harms consumers”. Contrary to what the naysayers and doom-mongers might have some people believe, the prospect of free trade presents positive and exciting opportunities for trade liberalisation and, consequently, the lives of the British people.

For example, after we leave the EU we can position ourselves as a beacon of free trade — a force for good in the world — and we can use global free trade to create a stronger and more sustainable agricultural sector here in Britain; without the ever higher subsidy payments to landowners and higher food prices that protectionism brings. This is a vision that can truly improve the lives of both taxpayers and consumers here in Britain — as we put people first, their families first and our quality of life first.

One debate inevitably about to reignite is a re-run of the 1999 ‘Beef War’, when Britain opposed the EU’s ban on hormone-treated beef — standing alongside the United States, which regularly opposes EU bans, against what is often nothing short of protectionism. We know the EU’s quality regulations are not always necessarily based on sound science — rather they are often based upon the principle of nanny-state precaution above all else. When I visited the US recently, I ate beef and chicken there — as did Labour and SNP politicians who visited with me. If you were to believe all you hear from those in the House of Commons, you would have thought we would have all keeled over by now. Two words: fake news!

The consumer-focused principles behind this example should ring true today as we form our future global trade policy. Why shouldn’t consumers — armed with the right information about where products are from and how they have been produced — be trusted to make their own decisions about what is right for themselves and their families?

Let’s treat the British people as they are — grown-ups! Let’s give them the choice between cheaper consumables and commodities — and more premium products. Let’s help them by cutting the cost of living, rather than backing an EU system that keeps prices high.

According to a 2016 study by the eminently reputable London School of Economics (an accolade I am sure I would bestow, regardless of it being my alma mater!), non-EEA free trade agreements already save UK consumers around £5.3 billion every year. Far from being a great achievement to cling to, this is merely a good starting point from which we must build our trade negotiations, given we still don’t have free trade agreements with some of the biggest global economies, such as the USA, China, Japan or India.

Further, the study found that current free trade agreements not only led to a price fall of consumables by one-fifth, but the quality of imported products improved markedly also. These are the real world successes of free trade — cited by an institution that continues to speak against Brexit — that we must replicate if we truly want to improve the lives of hardworking British consumers up and down the land. It is they we must stand up for — the forgotten people — in these politically correct, liberal metropolitan times.

Those of us who are free traders must be honest: trade is a two-way street. Just as we should pursue more competition here in Britain — delivering good quality products for consumers at competitive prices — we need to secure export markets that will pay us a competitive price for top quality products, from which we can buy those goods that come from overseas. That is where we can exploit Ricardo’s seminal theory of comparative advantage; producing the goods and services that Britain is globally renowned for at a relatively lower cost. Financial services are a perfect example of an area in which comparative advantage will benefit us — and others — greatly; increasing output, incomes and living standards, plus allowing others access to a wide range of products and deep capital markets to the benefit of their own economy.

Another example, take businesses such as Childs Farm in my constituency which is already the UK’s second biggest — and fastest-growing — producer of baby and child toiletry products, having only been founded in 2010. Despite Childs Farm’s success here in Britain, however, they only began exporting internationally in 2015, meaning exports make up only a small percentage of their business — a statistic in which Childs Farm is not a lone case, with fewer than 15 per cent of SMEs in Britain actually exporting abroad. Since the vote to leave the EU, Childs Farm has already seen an exponential rise in international interest; their products are now available in over 20 countries worldwide — with this number set to double in 2018. Aiding other SMEs to follow their successes must be a key focus to make Brexit the success we know it can be: to see the job creation and economic growth across the whole country that people voted for.

I opened this article with reference to the unprecedented opportunities that leaving the European Union offers — but we must not make the mistake of waiting for our new role in the world to come to us, like a lady waiting to be asked to dance. We must, instead, be bold, brave and pro-active. We must seize the opportunities awaiting us. It is our obligation — not just for us as politicians delivering on the will of the people, but for us as a society delivering for the next generation — to embrace ever freer trade so that we can deliver on the promise that Brexit offers. We must liberalise in a way we have not seen since 1846 and the repeal of the Corn Laws. That was a critical moment for the Conservative Party. This is another.

In 2016, 170 years later, the British people voted for change and prosperity. I am determined to make sure they get it. The British consumer — not vested interests — deserves to be put first.