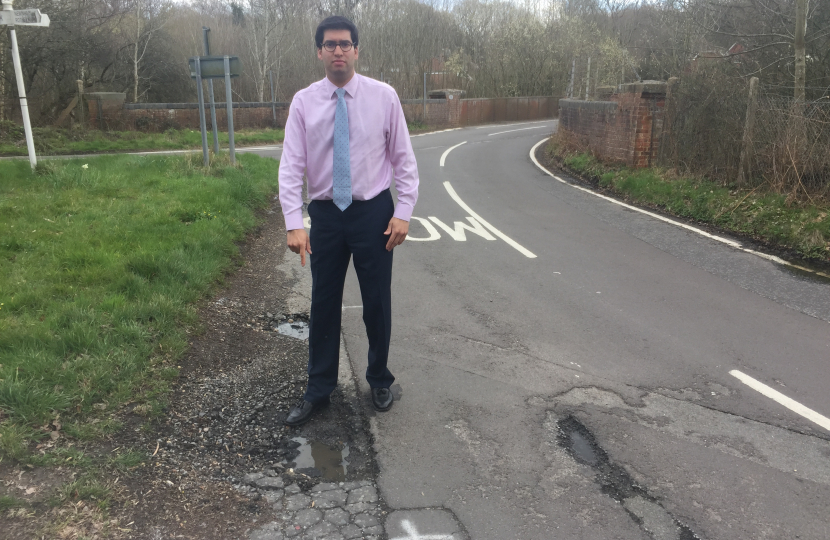 North East Hampshire MP, Ranil Jayawardena, has launched a new campaign to fix potholes in the local area, which present a real danger for road users.

The ‘Pothole Patrol’ calls for residents to report potholes, so this information can be passed to Hampshire County Council and Hampshire Highways. Mr Jayawardena pledges to follow up on reports to make sure that they get fixed as quickly as possible.

The government has given £500 million to local authorities to maintain roads – the equivalent of 10 million potholes fixed across the country. Of this, Hampshire County Council’s pothole funding for 2022 to 2025 is £14.8 million per year - and so Mr Jayawardena is calling for North East Hampshire to see its fair share of that investment.

The MP has set up an online form for residents to report the worst affected areas.

Ranil Jayawardena MP said, “Whoever you are, I want to help you get where you want to go. I have had letters from residents who have sadly had hundreds of pounds worth of damage to their cars, and they want to see more done to fix our roads.

“The process is simple: if you see a pothole while out and about in North East Hampshire – whether in a car, on a bike, or on foot – report it to me. I’ll follow up with the council to see that repair works are carried out at fast as possible.

“Working together, we can be a driving force to make sure that our roads here in North East Hampshire get their fair share of the large pot of money that the council has allocated to fixing potholes – so we can make sure that drivers, and their tyres, are not left deflated.”

This month, we’re celebrating and giving thanks for Her Majesty Queen Elizabeth II’s 70 years of dedicated service to our great nation – on this, her Platinum Jubilee.