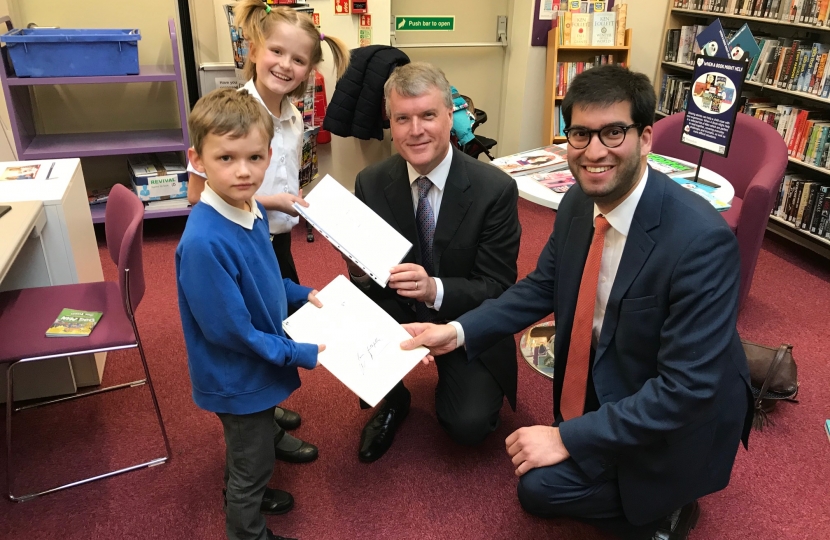 Over 100 local people signed Mr Jayawardena’s petition in the one month it was running.

Also at the handover were young Odiham residents Nina and Robert, who presented Cllr Woodward with their own petition against any closure, signed by pupils from Buryfields Infant School and Mayhill Junior School.

Mr Jayawardena handed over a hard copy of his formal response to HCC’s consultation also. This argued against either the closure of Odiham Library or the cutting of opening hours, but rather suggested other possible ways that HCC could secure the future of local libraries.

Mr Jayawardena has also recently met HCC’s Assistant Director responsible for library services to discuss the consultation and future of the libraries in more detail.

“The support for my petition locally has demonstrated just how valued Odiham Library is in our community – as well as the strength of local opinion against any closure.

“I’ve been particularly impressed by the young, avid readers who’ve proactively gathered petition signatures from their schoolmates and I was delighted to help them present it to the council too.

“I know many residents were disappointed to learn that Hampshire County Council had identified Odiham Library as a potential site for closure under their library services review though, as I’ve previously highlighted, while I’m not here to defend Hampshire County Council, in fairness to them, it is important to make clear that their consultation does not necessarily herald the closure of Odiham Library. Nonetheless, I believed it was important to show the strength of local feeling.

“I do believe that there are some solutions available to us to keep it open! My formal response to HCC’s consultation highlighted other ways that they can secure the future of our libraries, such as expanding their commercial property portfolio – like Basingstoke and Deane Borough Council has. However, even if HCC did decide that they don’t wish to run our local library any longer, I am sure a community-led solution can be found, like in Kingsclere.

“HCC’s consultation closes imminently – at 11:59pm on Wednesday 18th March – so I’d urge any constituent who has not yet made their voice heard to respond, at: https://www.hants.gov.uk/library-consultation”