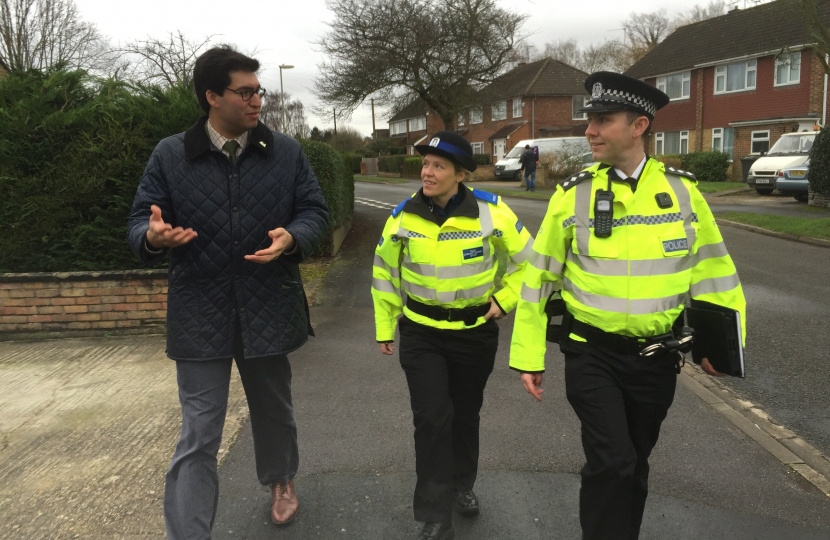 At the beginning of the year, I set out “Our Plan” for North East Hampshire—including providing local services that make our area greener, cleaner and safer. I wanted to focus this article on what I’m doing in Parliament to help make this happen—and I want to hear from you on your views too.

On 5th February, I voted for plans brought forward by the Home Secretary to increase total police funding by £970 million. This, together with a £2 a month increase in the police precept on council tax bills, will see funding for Hampshire Constabulary go up by £25 million in 2019 compared to 2018. This means more police officers, more investigators, more PCSOs and more people out on the streets keeping us safe.

Hampshire Constabulary have had a number of successes in recent months; arresting a man suspected of handling stolen goods in Odiham, executing warrants on suspected burgled goods in Yateley, and jailing two armed robbers for nine years each after a terrifying raid on a Nisa shop in Fleet. Extra funding will help them do more of this—but also help prevent the crimes happening in the first place.

I think we can go even further, though. I would like to see a named police officer for each area represented by a councillor—someone people can pick up the phone to and who is visible in the community. We could even start up a partnership between the police and a housing association and build police homes to ensure we have officers living in the communities they serve. All this would require further funding, of course, so I’d like to hear from you – would you be willing to a bit pay more, or are there other things within the current budget which could be reduced?

You’ll remember that we presented a petition to Parliament last year calling for greater action on unauthorised traveller encampments. I made it clear to Ministers that the current laws are inadequate and I’m delighted to say that they are listening. On 6th February, the government announced it was considering changes to the law which would, among other things, scrap the six-vehicle threshold before police powers can be used and make ‘intentional trespass’ a criminal offence. If this is a change you’d like to see, please sign and share my new petition to keep the pressure on. You can find it here.

Please also feel free to write to me with any ideas at email@ranil.uk and remember you can always meet me at my regular Tell Ranil events—details, as ever, on my website.