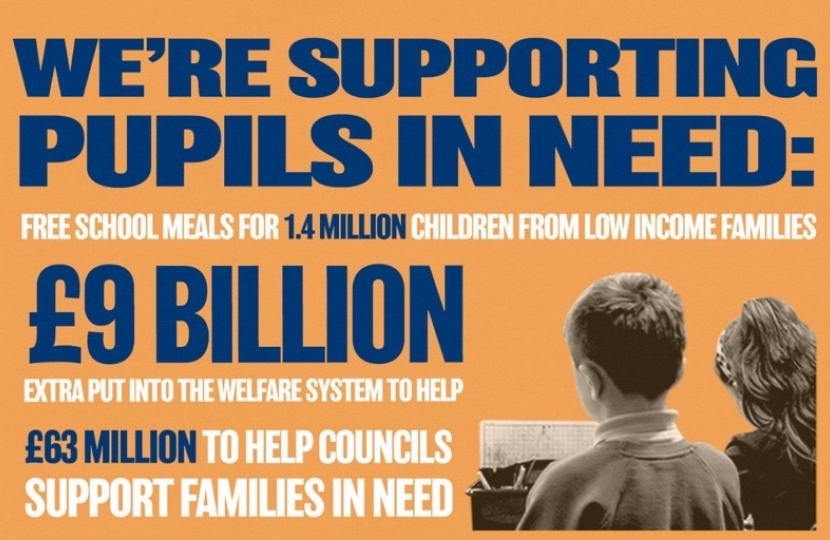 Last week, Parliament voted on extending Free School Meals outside term time. Labour love this issue. It serves up what seems like such an easy win to them – “horrible Conservatives denying children a meal”.

The reality is, of course, totally different. No-one in Parliament wants children to be hungry. No-one voted for that. Everyone wants to make sure that there is a safety net for those who need it.

The vote itself was reckless politicking from the opposition – it was a debate with no legal effect because it was a ‘motion’ to set out belief, rather than change the law. Whatever the result, it was designed to be divisive and win them some political points. I don’t doubt that they have succeeded on both counts. And, on social media, it has become clear that the ‘Chinese whispers’ have led to a number of further false accusations being made.

Here are the facts.

First – and this is important, because some people have been suggesting the opposite – Free School Meals will continue in schools, as they have done for over 70 years.

Second – benefits such as Universal Credit and Child Benefit continue to be paid to parents with low or no income, so that they can look after their family, as every parent wants to. This is the core of the safety net we’ve had in Britain for generations – helping families look after themselves, enabling them to make their own choices, rather than having the government make decisions for everyone.

Third – we all know that coronavirus has made life more difficult for everyone so simply handing out food vouchers for half term to those who receive Free School Meals doesn’t necessarily help those who need it most. For example, some children who receive Free School Meals because of low or no income in the past would have got food vouchers – even if their parents were now in work and able to afford the weekly shop; whilst other children would not – even if their parents had lost hours or income and were struggling.

As ever, making policy is tougher than it sounds. It is certainly full of complexities that are never shown on social media. And, though the received wisdom of social media would have you believe otherwise, it is completely false to suggest that MPs get £25 per day to spend on food in Westminster – and this has been confirmed publicly by the Independent Parliamentary Standards Authority, who set all MPs’ pay and budgets.

What we have done.

It’s true that HM Government extended the principle of Free School Meals – through food vouchers – over the summer holiday this year. Back then, most children hadn’t been in school since March, and families had been meeting the extra costs and demands of this. That was then, this is now. Over 90% of children are back in school and have been benefiting from Free School Meals during term as normal, so there is a difference.

HM Government has delivered unprecedented support to help those most in need throughout the pandemic, backed by £200 billion so that the most vulnerable families can get all the support they need.

In actual fact, it was this government that actually extended free school meal eligibility to a further 50,000 children and expanded programmes like breakfast clubs to get targeted support to those who really need it.

And, since the start of Coronavirus, we have added over £9 billion to the welfare system specifically.

That means that Universal Credit – money direct to families who need it – has gone up by over £1,000 this year. Local Housing Allowance has been increased too, £180 million of discretionary housing payments to help families with their rent has been handed out, and Hampshire County Council has been given more than £1 million of extra funds – enabling them to target funding to where it would be best used locally, including to food banks, charities and other organisations, to help vulnerable families at a similar level to the food voucher scheme brought in during the worst weeks of the ‘lockdown’.

As ever, if any constituent is in particular need themselves, I would urge them to contact me by email to: email@ranil.uk – or contact the council directly – so that they can access the support that is available.

I care. My party cares. Our record over many years shows that we care. Support is going to families who are in need. But you don’t hear Labour talking about this. Instead, we had their Deputy Leader, Angela Rayner, calling one of my colleagues “scum” on the floor of the House last, as they sought to whip up tensions.

Rather, it is the opposite. Caring means helping people help themselves. Caring means enabling people looking after their own family. Caring means creating a more responsive and effective welfare system than ever before, which is what HM Government has sought to do – enable families to better budget for their own needs.

I firmly believe that we need to avoid deepening a cycle of state dependency. We inherited far too much of this from the last Labour government, which we have worked to reform for many years, but Sir Keir Starmer and co would take us right back there.

Indeed, Labour and the Lib Dems want to take us back to a national lockdown, where life would get even tougher all over again. Local people don’t want that. That’s why the Conservatives will continue to take the tough decisions to get things back to normal.

Of course, coronavirus has created an ever-changing landscape, so HM Government continues to review its policies and decisions – and will respond to the needs of the British people.