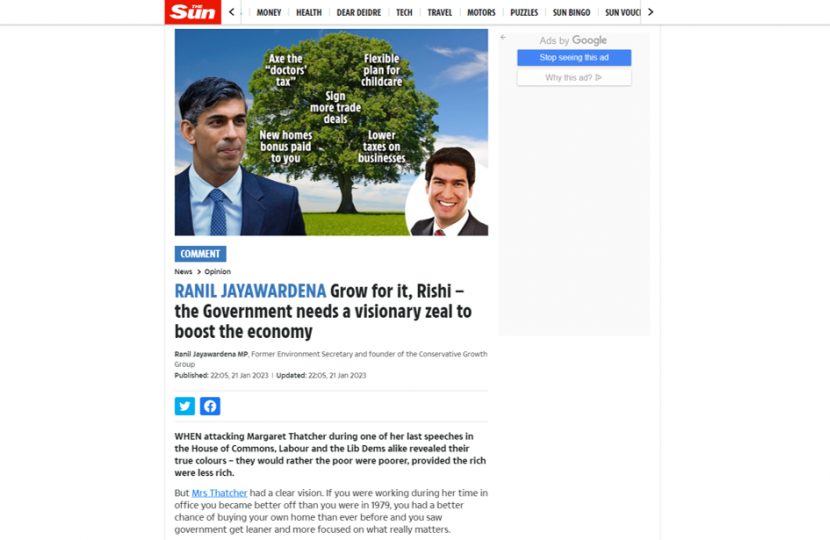 WHEN attacking Margaret Thatcher during one of her last speeches in the House of Commons, Labour and the Lib Dems alike revealed their true colours – they would rather the poor were poorer, provided the rich were less rich.

But Mrs Thatcher had a clear vision. If you were working during her time in office you became better off than you were in 1979, you had a better chance of buying your own home than ever before and you saw government get leaner and more focused on what really matters.

From 1997, that changed. Government lost its visionary zeal.

The ideas for economic growth, home ownership and a focused state were forgotten.

It’s time to turn it around.

We look forward to supporting the Prime Minister and the Government in delivering the medicine that our country needs now and making the case for the Conservative belief that business, enterprise and aspiration creates wealth and success, not government taxing people and spreading that money around.

I know it’s a tough time. The Government is right to want to tackle inflation — but the Governor of the Bank of England now says we’re turning a corner.

We should go for growth by slashing red tape, targeting cutting taxes and refocusing the state.

It is self-fulfilling. It will grow the economy. And a bigger economy means more revenue is coming in to pay for public services.

As Environment Secretary, I pushed forward a dozen “hacks” that would back our own farmers, cut costs for shoppers and — yes — grow the economy.

From changes to food labelling to wine regulations, there are similar Brexit “quick wins” across the whole of government to boost growth.

We all want to back our public services, but spending more of your money only goes so far.

We are spending almost £500million a day on the NHS, but that is no good to you if you can’t see a doctor when you need to.

It might sound like a minor ailment, but to help the NHS right now we need to scrap the “Doctors’ Tax” on pensions — tax rules that mean medics and others are hit by huge tax bills for taking on extra hours or retiring later in life.

This would help us retain and attract more doctors into work.

By scrapping the lifetime allowance on everyone’s pensions, and not taking away the tax-free allowance on earnings over £100,000, we would halt our most qualified doctors taking early retirement and make sure you get the care you need.

Improving our quality of life requires new homes, and it would boost the economy too.

We need the right homes, in the right places, with the right infrastructure.

Who should decide what’s right? I think you should, don’t you?

Wherever new homes are put forward, the downsides are mainly felt by the residents nearby and the benefit spread all too thinly across the country, so it’s no surprise that no one is arguing for homes to be built anywhere near them.

What would be wrong with slimming down the bureaucracy and giving people most affected their own “new homes bonus” directly, rather than — for example — filling bus company pockets for buses that are never used and get binned as soon as the one-off funding runs out?

Those of you with children will know the difficulties of finding the right childcare. Even here, tax cuts could help.

Instead of the Government dictating how many hours of free childcare you get and who you can get it from, how about tax reliefs so you and your spouse can pay for the childcare you want, from who you want?

Or one parent could stay at home, allowing the other to work extra hours, if that’s what you want to do. Instead of one-size-fits-all from Whitehall, you should decide what works in your household.

With lower taxes on business too, Britain will be more competitive and attractive to foreign trade and investment — and that means better jobs and higher wages, more exports to the world and lower prices at home.

When I was trade minister, we had agreed trade deals with 71 countries worldwide, covering trade worth more than £800billion in 2021, so I know businesses are manufacturing in Britain and selling to the world.

And if we join the Trans-Pacific Partnership and sign deals with both India and the Gulf Cooperation Council, even more is possible.

Given that the economic situation is better than some expected, perhaps now is the time to look again at the business tax hike from 19 per cent to 25 per cent?

Margaret Thatcher had a great vision for this country. She set us on a road — the road less travelled in the Western world — towards higher growth, higher wages and better lives.

There are no easy decisions in politics, but now is the time to continue that course.

The Conservative Growth Group is just getting started.

The following article by Ranil Jayawardena MP appeared in The Daily Express | Comment on 19th January 2023.