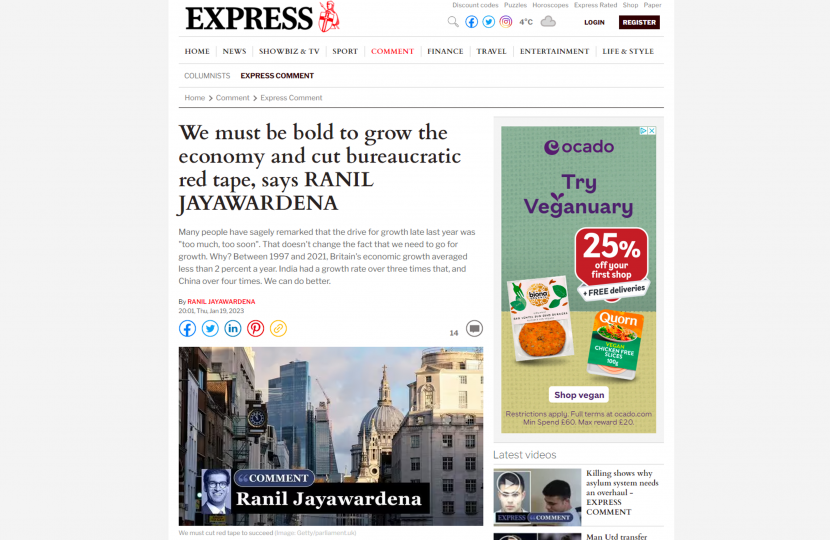 The following article by Ranil Jayawardena MP appeared in The Daily Express | Comment on 19th January 2023.

Many people have sagely remarked that the drive for growth late last year was "too much, too soon". That doesn't change the fact that we need to go for growth. Why? Between 1997 and 2021, Britain's economic growth averaged less than 2 percent a year. India had a growth rate over three times that, and China over four times. We can do better.

In 1997 – the year that we upgraded our television sets from four channels to five – the world was a very different place. Since then, businesses have been founded, technology has been developed, and jobs have been created.

But, unlike in fast-growing economies around the world that’ve seized the opportunities of recent times, nothing has shifted the dial here.

We have fallen behind on roads, rail, energy and social infrastructure too.

But we’ll only truly get the growth we need if we cut through the statism and red tape that has built up over the last two decades.

We should not be afraid of a bold plan to cut taxes and grow our economy.

Abolishing Stalinist top-down housing targets and replacing them with the right incentives.

Freeing up families to live their own lives and choose their own childcare.

Growing the economy means the tax take goes up, even if tax rates go down.

It pays for crucial public services, whilst sticking to the Conservative belief that you know best how to spend your own money. And it helps make sure that the lives of our children and grandchildren are better tomorrow than ours are today.

There is a fight to be fought.

The Labour Party continue to believe that government should take someone’s slice of the pie and give it to someone else – and this orthodoxy pervades our institutions today. But that is an anti-growth approach.

We can grow the economy, baking a bigger pie, benefitting everyone. Margaret Thatcher had the right approach; she delivered for Britain in the 1980s and I am sure that we can do it again.

Ranil Jayawardena is the Conservative MP for North East Hampshire.