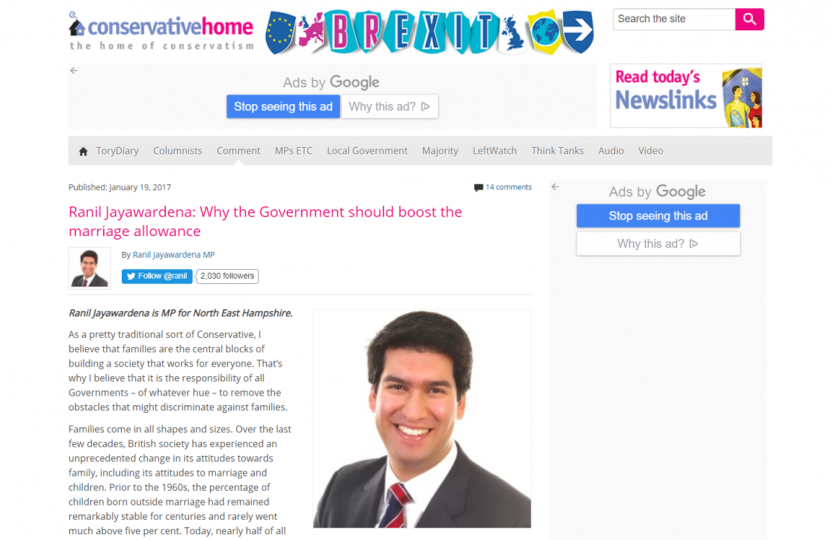 As a pretty traditional sort of Conservative, I believe that families are the central blocks of building a society that works for everyone. That’s why I believe that it is the responsibility of all Governments – of whatever hue – to remove the obstacles that might discriminate against families.

Families come in all shapes and sizes. Over the last few decades, British society has experienced an unprecedented change in its attitudes towards family, including its attitudes to marriage and children. Prior to the 1960s, the percentage of children born outside marriage had remained remarkably stable for centuries and rarely went much above five per cent. Today, nearly half of all children born in Britain are born to unwed parents, of whom, sadly, 35 per cent have split up before their child’s fifth birthday – compared with only 9 per cent of parents married before the birth.

Not only is the UK almost last amongst OECD countries ranked by the proportion of children and adolescents living in households with both parents, it is behind in recognition of family and marriage in the tax system also. While the human cost of this to children is impossible to quantify, the financial cost of family breakdown – children of separated parents being up to 75 per cent more likely to face educational, behavioural, financial and health problems – is estimated at £47.5 billion a year.

Yesterday, I was pleased to host, along with the Bishop of Chester, the Parliamentary launch event of a quantitative report into how different countries distribute the tax burden between married couples, families and single people. Written by Fiscal Policy Consultant, Alistair Pearson, one of their headline findings is that UK married couples with a single-earner and two children face an income tax burden 26 per cent greater than the OECD average. If this wasn’t concerning enough, another is that UK families earning 50-75 per cent of the average wage face the highest effective marginal tax rates – and over double the average – of any OECD country, keeping just 27 pence in every extra pound earned!

Clearly, as yesterday’s report shows, British families are disproportionately penalised compared to those from other OECD countries. And the system remains rigged against those families with, for whatever reason, only a single-earner.

The Government’s marriage allowance, introduced from April 2015, recognises that we must reduce this unfairness. David Cameron said that “families are the bedrock of our society. It’s families who raise our children, look after our old and keep our country going. And this tax change is about saying as a society, we recognise that”. I thank David Cameron and George Osborne for making this important change to the tax system. But there’s much further to go.

This is in stark contrast to the last Labour government, which felt that working people under the age of 65 – i.e. those most likely to be working – deserved to have their married couple’s allowance taken away. They clearly didn’t offset the cost of reducing a tax bill by several hundred pounds against the saving to the public purse of approximately £29,706 if one of the estimated 1.6 million lone parent families no longer breaks down. Surely even Labour would want to reduce the number of people on welfare?

4.2 million families stood to gain an average of £197 at the introduction of the marriage allowance. A further £220 saving on each tax bill from increasing the allowance from ten per cent to 20 per cent could inject around £1 billion of extra disposable income into the economy that is free to be spent as families see fit.

Extending the allowance would underline our commitment to the principles of social justice. Continuing to target the allowance at basic rate taxpayers in the first instance stands by our commitment to help those who are just about managing. Supporting families further would make clear that we are serious about a society that works for everyone.

As well as highlighting the Marriage Allowance during the second reading of the Small Charitable Donations and Childcare Payments Bill in the House of Commons, I met the Chancellor of the Exchequer, Philip Hammond, M.P., to discuss what more the government can do to help married couples through t