Brexit Central - Having voted down the May deal three times, here’s why I believe Boris Johnson’s deal deserves support 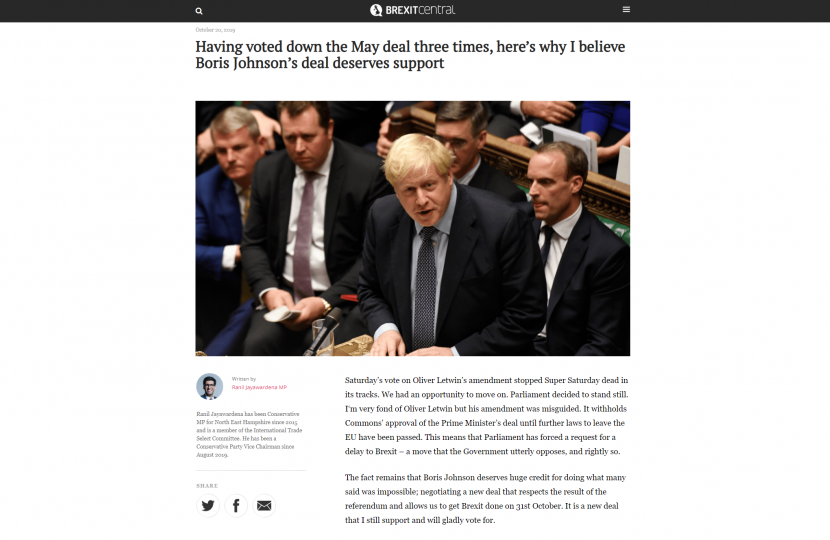 The following article by Ranil Jayawardena appeared in BrexitCentral on 22nd October 2019.

Saturday’s vote on Oliver Letwin’s amendment stopped Super Saturday dead in its tracks. We had an opportunity to move on. Parliament decided to stand still. I‘m very fond of Oliver Letwin but his amendment was misguided. It withholds Commons’ approval of the Prime Minister’s deal until further laws to leave the EU have been passed. This means that Parliament has forced a request for a delay to Brexit – a move that the Government utterly opposes, and rightly so.

The fact remains that Boris Johnson deserves huge credit for doing what many said was impossible; negotiating a new deal that respects the result of the referendum and allows us to get Brexit done on 31st October. It is a new deal that I still support and will gladly vote for.

I say that as someone who voted against Theresa May’s deal on all three occasions. I didn’t do so lightly. To my mind, the risk of the United Kingdom remaining trapped in an indefinite backstop was too great and meant that I simply could not vote for it. In stark relief, I believe that the new deal secured by Boris Johnson delivers on the result of the 2016 referendum and will allow us to move on, embracing the exciting opportunities that lie ahead for our country as we do.

This new deal will allow us to take back control of our laws, borders and money. It will provide the basis of a new relationship with the EU, based on free trade and cooperation.

The problem with the previous deal was that Brussels had ultimate control and could have forced us to accept EU laws and taxes forever. The new deal will ensure that British voters are in control. We will be free to make our own laws and control our own regulations in areas from product standards to agriculture – to make sure that they really work for the United Kingdom.

As the Prime Minister said in his statement on Saturday, we will maintain the very best standards, and we will lead in environmental protection and social protection across Europe and the world. Brexit gives us the freedom and the opportunity to do things that we have not been able to do that are deeply desired by the British people, such as banning the live export of animals.

This deal will allow us to deliver on the result of the referendum and leave the EU on 31st October. We can then focus on the things that really matter to people across the country, like making sure that there are more police on our streets, giving our NHS the resources that it needs and funding our schools to make sure that our children have a truly world-class education.

We will also leave the Customs Union as one United Kingdom. For the first time in more than forty years, we will have the ability to strike our own free trade deals with our friends and partners all around the world. We will be able to position ourselves as a beacon of free trade and a force for good in the world, whilst securing continued economic growth.

The referendum was a vote by the British people for change and MPs from both main parties stood on manifesto commitments to honour the result. Since the vote on Saturday, we have seen clear anger from the British people, who feel that MPs are trying to frustrate the result. The referendum was the single largest democratic vote in our nation’s history. Brexit belongs to the people of this country and MPs across the House have a duty to deliver it. This is our chance to be bold, take ownership and put the people first. The time is now.