Conservative Home - Ranil Jayawardena MP - I voted against the old deal three times, but I will proudly support the new deal tomorrow 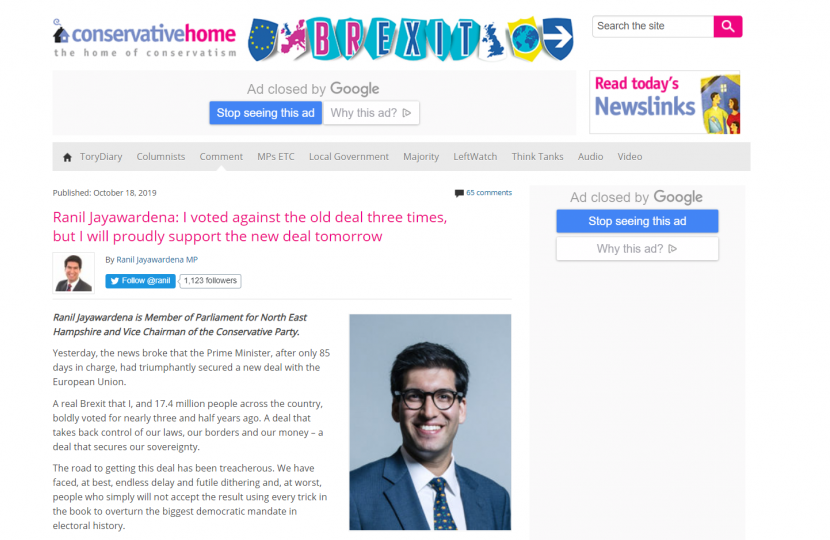 Yesterday, the news broke that the Prime Minister, after only 85 days in charge, had triumphantly secured a new deal with the European Union.

A real Brexit that I, and 17.4 million people across the country, boldly voted for nearly three and half years ago. A deal that takes back control of our laws, our borders and our money – a deal that secures our sovereignty.

The road to getting this deal has been treacherous. We have faced, at best, endless delay and futile dithering and, at worst, people who simply will not accept the result using every trick in the book to overturn the biggest democratic mandate in electoral history.

The previous Prime Minister tried diligently to secure a deal but unfortunately I, like many of my colleagues, felt that it just didn’t stack up to the pledges that were made during the referendum. It did not honour what Britain could be, free from the rule of the EU. It left us trapped in the EU’s regulatory orbit and unable to sign our own trade deals. Voting against your own government is a difficult thing to do but, for me, the previous deal gave me no choice.

That was why I was convinced that our next leader should be Boris Johnson. He pledged to abolish the Backstop, get a new deal, and leave by 31st October. He has achieved two of these things and, if Parliament does the right thing, he will achieve the third in two weeks’ time. This is despite being told by, as he would put it, the ‘gloomsters and doomsters’ that the EU would never reopen the Withdrawal Agreement, the Backstop would never be taken out and it was laughable to think that we could leave the EU by 31st October.

This deal, which I’ll be proud to vote for on Saturday, will make sure that we will deliver on our promises to the electorate. I can honestly write that – having been someone who voted against the old deal three times – we will, at long last, be honouring what we promised the British people and we will be taking back control of our laws, our borders and our money.

We will be an independent United Kingdom – and this is a fundamental point – because, unlike the last Withdrawal Agreement, this deal will mean that Northern Ireland will remain in the UK’s customs territory, so it will not be for foreign powers to decide the future of any part of our country.

The last deal left us locked in to the remit of the European Court of Justice and unable to set our own laws. This matter is key to the question of who governs this country. This new deal will make sure that the supremacy of the European Court of Justice ends in Britain. It will be our courts, applying our laws, which will be the highest authority in the land. This is yet another pledge that we were told was impossible to achieve. Thanks to this new deal, those laws will not only be ruled upon by British judges, but be set by democratically elected representatives in this country. Britain will be out of all EU laws. We will be able to improve our laws in a huge number of areas – from product standards, to fishing rules, to farming subsidies.

For three long years, we have dithered and hovered over the exit sign. I’m sorry it’s taken so long. Some of us have tried to make sure that our promises to the 17.4 million were kept, whilst others have tried to stop us leaving at all. As an MP, I believe one of the most fundamental roles we have is upholding our democracy and making sure that when the British people tell us to do something, it is done, properly. This new deal that Boris has achieved – against all the odds – will bring an end to the uncertainty and division. It is time to unite the country. It is time to get back to the domestic issues that matter to people up and down the land. Quite simply, it is time to get Brexit done.

Ranil Jayawardena is Member of Parliament for North East Hampshire and Vice Chairman of the Conservative Party.