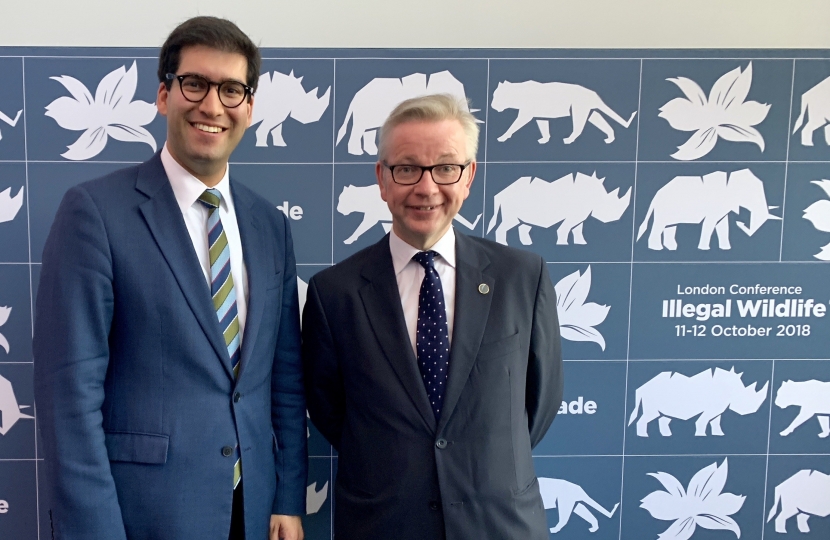 Member of Parliament for North East Hampshire, Ranil Jayawardena MP, is pleased to welcome £6 million extra from the Department for International Development to help protect some of the world’s most iconic and endangered species including rhinos, elephants and pangolins.

As the last of a long string of Parliamentary Questions, Ranil Jayawardena MP asked a Minister in the Department for International Development yesterday what she has done to use aid funding to help protect endangered species. The response from the Minister was very encouraging. Harriet Baldwin MP said: “We are working to ensure the London Conference on the illegal wildlife trade this week will deliver tangible actions that help stamp out this destructive, billion dollar criminal industry.”

She added: “The hon. Gentleman is absolutely right—the UK is leading the world by hosting the summit this week, and it is at the forefront of tackling this heinous crime. I am delighted to announce to Parliament that there will be a further £6 million uplift to the illegal wildlife trade challenge fund, and more money for the international action against corruption programme to tackle illicit financial flows that are linked to the illegal wildlife trade.”

The announcement of extra funding also comes as, this week, the UK is hosting the 2018 Illegal Wildlife Trade Conference in London, opened by the Prime Minister and attended by HRH The Duke of Cambridge, the Rt Hon Michael Gove MP and Ranil Jayawardena MP amongst others.

It builds on work by HM Government, which is now putting forward a Bill to ban trade in ivory; as well as making sure the Ministry of Defence is helping to train park rangers from other countries to patrol and protect wildlife sanctuaries too.

“Protecting and conserving our environment for the next generation means not just the environment in north Hampshire, but the climate, wildlife and planet we all share and want our children and grandchildren to have the opportunity to enjoy too—including those species currently endangered and facing extinction.”

“I believe passionately that we must protect those who cannot protect themselves, including the twenty thousand elephants horrifically murdered for their ivory annually—one grotesque slaughter every twenty six minutes.

“Only last month, I had to raise with the Prime Minister a survey from Botswana that poignantly found ninety carcasses near a famous wildlife sanctuary.

“Right-thinking people are all the more shocked by this outrage as animals hold a special place in British society and in the hearts of British people. Needlessly causing suffering or death to gentle creatures is wholly abhorrent.

“When I was first elected to Parliament in 2015, I stood on a manifesto that promised to tackle the international wildlife trade and press for a total ban on ivory sales. I am delighted to say I helped the House of Commons pass a Bill to deliver on that promise."