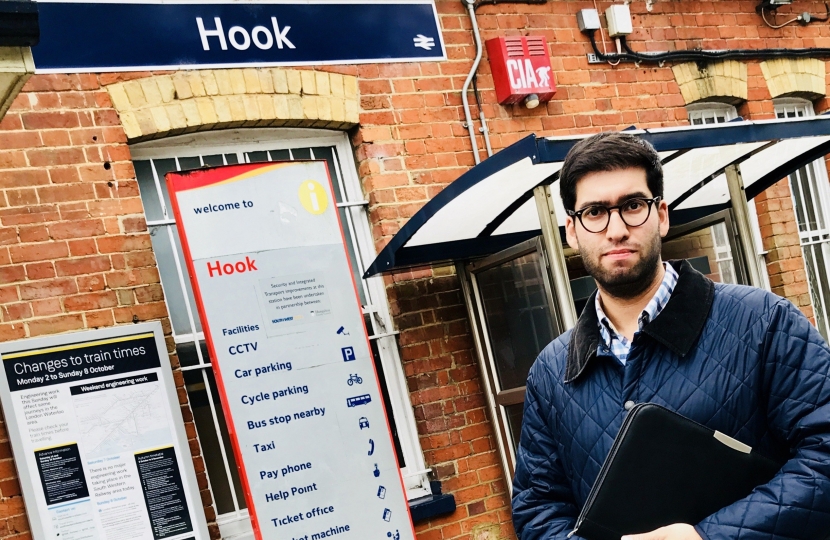 The new operator of the mainline from Basingstoke to London Waterloo, a route used by hundreds of commuters from the North East Hampshire area, is consulting on a new timetable to commence in December 2018. If it goes ahead, the new timetable would see a reduction in the number of trains stopping at Hook and Winchfield from four to two each hour during the morning peak, as well as increased journey times.

The proposals included in SWR’s winning bid for the South Western franchise included a promise of “new and better trains, more seats, improved service frequencies and quicker journey times” but the new proposals go against this promise for users of Hook and Winchfield stations.

Mr Jayawardena has launched a petition against the changes which he is encouraging local residents to sign. The petition is available at: bit.ly/hookwinchfield.

The SWR consultation closes on 22 December 2017 and in addition to signing his petition, Mr Jayawardena is encouraging local residents to respond.

“I am appalled that South Western Railway have already reneged on the promises that helped them win the South Western rail franchise. I would urge them to re-think their timetable changes immediately.”

“I will be actively pursuing this matter on behalf of my constituents and intend to discuss this with managers of South Western Railway, as well as colleagues at the Department for Transport, as a matter of priority. I would also encourage local residents to sign my petition against the changes, as well as responding to the South Western Railway consultation.”

The South Western Railway consultation is available at: https://www.southwesternrailway.com/contact-and-help/timetable-consultation