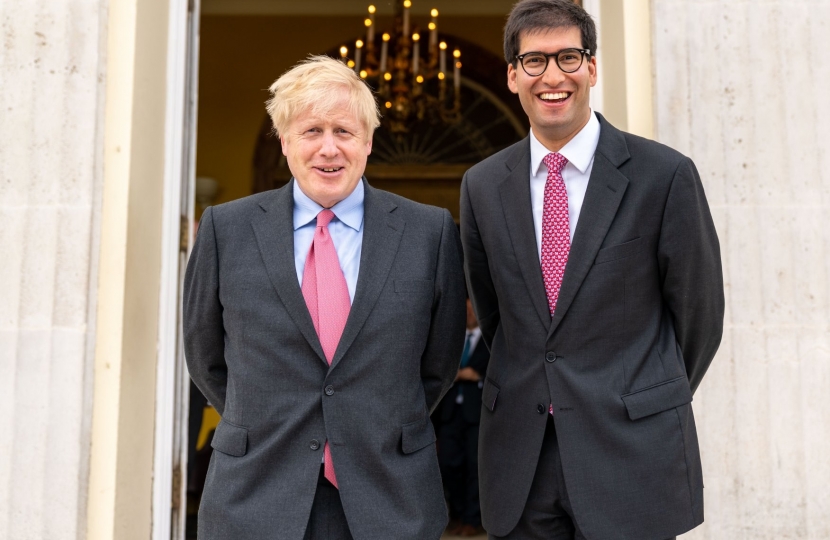 A new Prime Minister and a fresh start

After a hectic parliamentary term, the House of Commons has now risen for summer recess, leaving me with more time to spend with you here in North East Hampshire and – hopefully!  – enjoy a fine English summer as I am out and about. I am delighted to have been appointed as Vice-Chairman of the Conservative Party, and asked by the Prime Minister to focus on developing our post-Brexit policy – listening to people here in Hampshire and beyond to find out what we should do as we take Britain forward.

But we have to get Brexit done first. Regular readers of this column will know, of course, that this was one of the reasons I backed Boris from the beginning. In my judgement, he was the only candidate who could deliver Brexit, and do it by 31st October, come what may. This is important to me, not only to rebuild trust between the British people and their elected representatives, but so that we can unite our country after three years of division. When I’ve been knocking on doors, people tell me they want MPs to get on and make people’s lives better here in North East Hampshire and elsewhere in the country – so I want to hear your ideas on a postcard from wherever you might be this summer!

What has Boris already set out that will improve our lives here in Hampshire? His promise to spend £1.1 billion on 20,000 more police officers, for example, will be focused primarily on areas like ours that have been underfunded by Labour governments in the past and not corrected until now. This would be a huge boost to the hard work of all our policemen and women who are focused on tackling crime. Boris has an encouraging record of bringing crime down. When he was Mayor of London, crime decreased by 20 per cent overall, while homicide – at appalling levels now under his successor – decreased by half.

One thing which constituents frequently write to me about is the absence of high speed broadband in many areas. Understandably, they feel left behind in a country which rolled out high speed fibre optic in metropolitan areas years ago, when they struggle even to listen to the cricket on their computer. Boris has already described the government’s commitment to a full roll-out of fibre optic broadband in every home by 2033 as “laughably unambitious” – and has pledged to do the job by 2024 at the latest. There will, of course, be a cost to this. But every pound invested in connecting our country and wiring up residents and businesses will secure economic gains several times over. It also benefits the economy when people have more money to spend, and Boris has also pledged to look at ways of lifting people on low incomes out of tax – with raising the thresholds for National Insurance a priority – as well as taking people for whom it was never intended out of the higher rate of tax, such as experienced teachers, police inspectors and senior nurses.

As the father of two little ones, I also want to know that they will have the best opportunities to unleash their talents in education, and Boris’s plans are encouraging here, too. He rightly praises the great strides which have been made in London schools – partly as a result of increased funding – but that this should be rolled out in the rest of the country. This would be achieved by levelling up funding around the country, protecting that funding in real terms, and emulating the German system which gives equal esteem to vocational and academic learning. We’ve already secured £3.5 million extra every year for schools in North East Hampshire, compared with 2015, and Boris’ pledge will help take this a step further.

Once Brexit is out of the way, we have a golden opportunity to unite our society and unite our country. This is something I am focused on. If you would like to play your part in developing our post-Brexit policies, please send your ideas to: email@ranil.uk