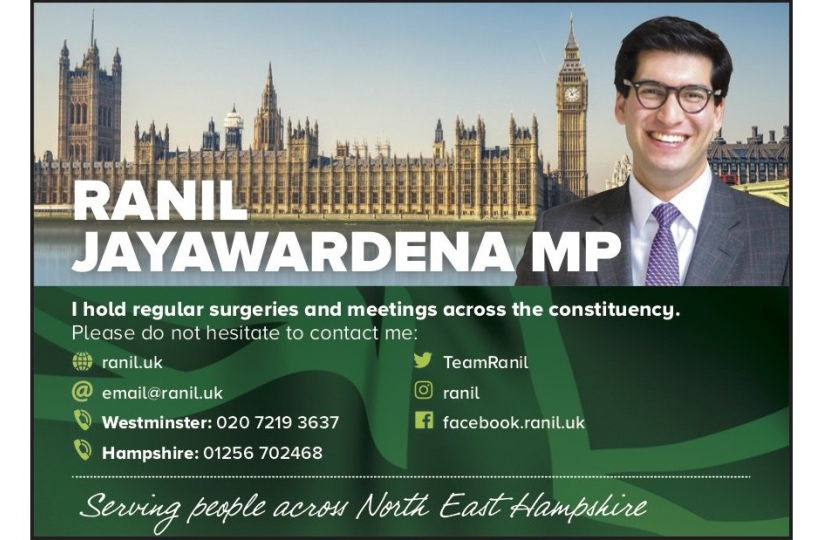 Regular readers of this column will know that, as someone who grew up in Hook and who spent many years as a councillor and Deputy Leader of Basingstoke & Deane Borough Council, I have always taken a keen interest in the built environment of North East Hampshire – both as a means of beautifying our surroundings and of serving the needs of residents and businesses.

Not far from here, in my colleague Leo Docherty’s constituency of Aldershot, Rushmoor Borough Council is embarking on an ambitious regeneration programme for Aldershot town centre. This will completely transform a town with latent potential, into an attractive and dynamic space that meets the needs of residents and businesses in the 21st century.

Indeed, it will do this in part because much of the redevelopment is mixed-use, meaning people will actually be living alongside the businesses which serve them. In the internet age, when people are less willing to travel in order to go shopping and eat out, this is the best way of ensuring the continued survival our high streets – and, subject of course to planning permission through the local council, this is exactly what will be happening in Aldershot. The High Street Multi-Storey Car Park, Arcade Shopping Centre, and Gallery Shopping Centre – empty for a decade I understand – are expected to be transformed into a development of 600 new homes, retail units, and a public square.

Rushmoor has also made use of all the powers at its disposal to effect this fresh vision for Aldershot, including the contingency of Compulsory Purchase Orders (CPOs) when it has been unable to convince landowners to sell up. This is exactly what happened on the nearby Union Street – which had been identified as no longer attractive to major retailers and had many empty units – after the council unsuccessfully attempted to purchase a number of properties for redevelopment. Once the council instructed Savills to carry out CPO valuations of all units, the purchases were successful.

These successful regeneration projects, which are bringing in new businesses by redeveloping brownfield sites, are only possible because Basingstoke & Deane Borough Council and Rushmoor Borough Council both have strong and comprehensive visions for their districts. It can be done. Many residents tell me that they would like Hart District Council to be bolder and play its role in developing a regeneration vision for Hart, just as their neighbours have done. They needn’t start from scratch. They can build on some of the work that has already been done for them by, for instance, Hook Parish Council and their Neighbourhood Plan. It can be done!

As ever, I would be interested to know your views on this, as well as how you would like to see your area regenerated. You can send me an email to: email@ranil.uk or attend one of my ‘Tell Ranil’ events. Details, as ever, on my website.

We are lucky to live in a prosperous part of the country where almost everyone who wants a job has one. Looking to some of our local, district and town centres, however, it is clear to see that Fleet, Yateley and Hook are all in real need of revitalisation and regeneration.