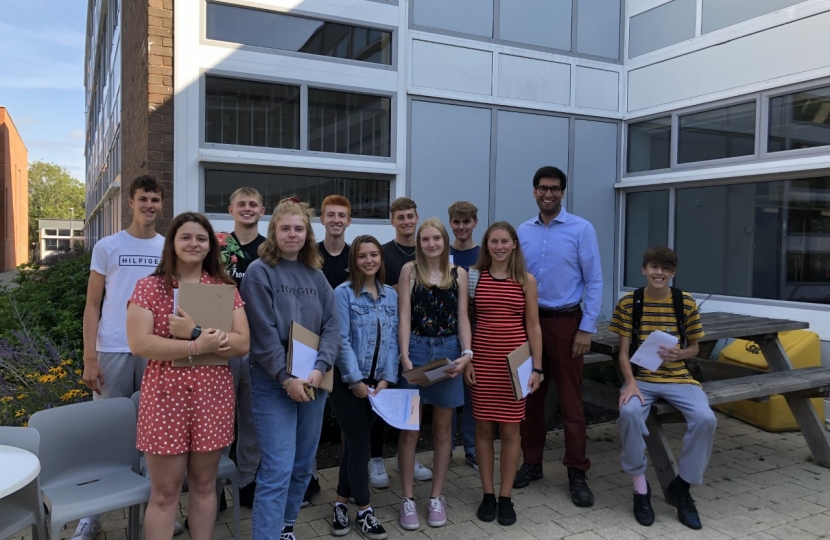 A superb education for everyone

While the weather in August seemed about as predictable as our politics at the moment – I really enjoyed being able to spend so much time in North East Hampshire, speaking to local people about the things that are important to them in pubs, cafés, supermarkets, and on the doorstep. I also got the chance to meet some of the next generation of voters at Yateley School and Calthorpe Park School as they received their GCSE results.

As a result of the reforms implemented by Michael Gove when Education Secretary, there have been great efforts to improve standards and prevent ‘grade inflation’. It was terrific to see so many young people across North East Hampshire achieving such excellent results. Across Hampshire, 69 per cent of pupils achieved grade 4 in English and mathematics – up from 67 per cent last year – and the ‘attainment 8’ standard also improved on last year. It is a real testimony to the dedication of our hard-working teachers, parents, and pupils.

Education is an investment in the future of our country, so I am pleased that more money is going into our schools than ever before – including £3.5 million more every year for North East Hampshire than when I was first elected in 2015.

Despite this, there are areas of the country which have been getting comparatively more funding for their schools, London being a good example. As a former Mayor of London, Boris Johnson has seen first hand the transformative effect this targeted funding had on education in the capital, which had lagged behind the rest of the country for decades. That’s why, as Prime Minister, he has pledged to “level up” funding across the country, in areas where schools have been historically underfunded, such as Hampshire.

Per pupil funding has gone up in Hampshire, but Boris’ pledge to level up every school’s funding – rising to a minimum of £4,000 per pupil in primary schools and £5,000 in secondary schools – and the House of Commons Library has analysed school funding data to see which schools will benefit. North East Hampshire’s historically underfunded schools could see funding raised by almost five per cent per pupil, with 12 of our schools seeing an increase of more than 10 per cent. In cash terms, this would mean another £2.9 million more, each and every year, compared to the Department for Education’s funding in 2019/20.

And not a single school will see its funding cut to pay for improvements elsewhere, which has been the stumbling block in the past.

I think we can go further than simply increasing funding for schools, though. We have a real opportunity now to rethink how technical and vocational education works too. Germany, for instance, has a highly skilled workforce in world-leading science and engineering sectors as a direct result of an education system which identifies and funnels technical aptitude early, and where vocational education has just as much prestige as academia. I know Boris wants to take our education system in this direction, but I’d like to know what you think. How could we get the best results for our children in North East Hampshire and beyond?

Send me an email to: email@ranil.uk or come along to one of my regular Tell Ranil events. Details, as ever, on my website!