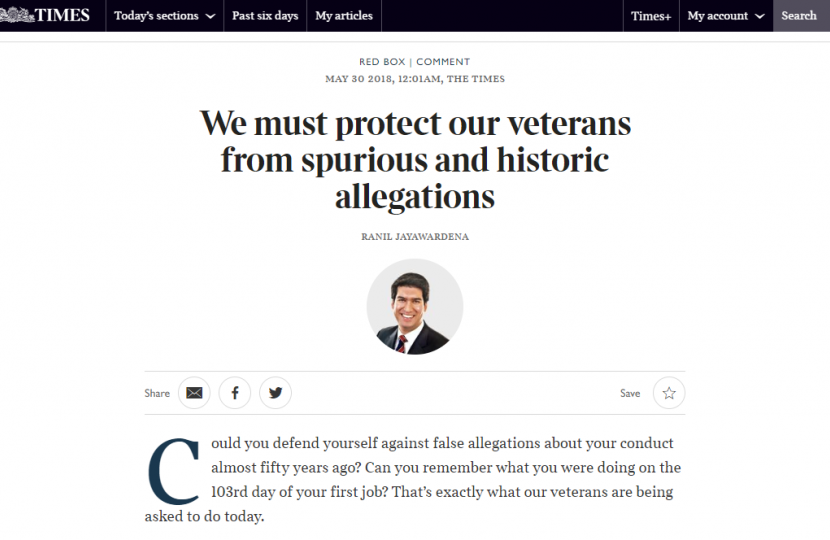 The following article by Ranil Jayawardena MP appeared in The Times Red Box | Comment on 30th May 2018.

Could you defend yourself against false allegations about your conduct almost fifty years ago? Can you remember what you were doing on the 103rd day of your first job? That’s exactly what our veterans are being asked to do today.

I believe that the first duty of government is to keep our country safe. Safe from those who would do us harm, whether here at home or abroad. Our fantastic servicemen and women sign up to do just this — and are ready to step up and put their lives on the line to look after us. So why is it, time and again, we don’t seem to look after them?

Veterans are facing repeated, historic and false allegations — and wrongful prosecutions — right now. We’ve seen this before, following Iraq, but we haven’t learnt the lesson. Take my constituent, ‘LT’. He served with distinction from 1950 for almost 30 years, becoming a lieutenant-colonel.

He served our country all over the world, from Northern Ireland to Korea, Oman to Sudan, and more — and, following his retirement, he has volunteered for countless charities and veterans’ associations. He’s still at it today.

From their accommodation, to their kit, and now their reputations, our servicemen and women always get a raw deal. I’d contend that in return for their dedication, loyalty and bravery we have a duty to have their backs.

But we must do more.

Is it not shameful that septuagenarians and octogenarians are now living in fear, not at the hands of common criminals, but bureaucrats and lawyers? This is a disgrace. It is surely not what anyone wants to see and certainly not for those who’ve served our country. But this is what is happening out in Britain today.

These great folk have seen their characters questioned and their reputations besmirched for no reason. We must restore them. For our sake and theirs. That is why I have launched a petition, along with my friend and parliamentary neighbour, Leo Docherty MP, to urge the government to introduce a new statute of limitations to back our troops.

This would protect servicemen and women — past, present and future — from spurious, vexatious and historic allegations. Evidence disappears, the mind fades and yet the allegations have the same effect as if it were yesterday. That can’t be right. Veterans should be free to get on with their lives without having to look over their shoulders. It would protect those who served their country selflessly in conflicts from Northern Ireland to the Falklands, the Balkans to Iraq, and all other overseas combat operations. It would also guard against repeat investigations and ill-considered prosecutions.

If you believe in this Covenant and want our servicemen and women to get a fair deal through a new statute of limitations, I would urge you to let your member of parliament know. And you can, of course, sign my petition at: ranil.uk/military

Ranil Jayawardena is a Conservative MP

Backing Our Servicemen and Women

The first duty of HM Government is to keep us safe from those who do us harm—within or without.

Our fantastic servicemen and women put their lives on the line to look after us—now we must look after them.